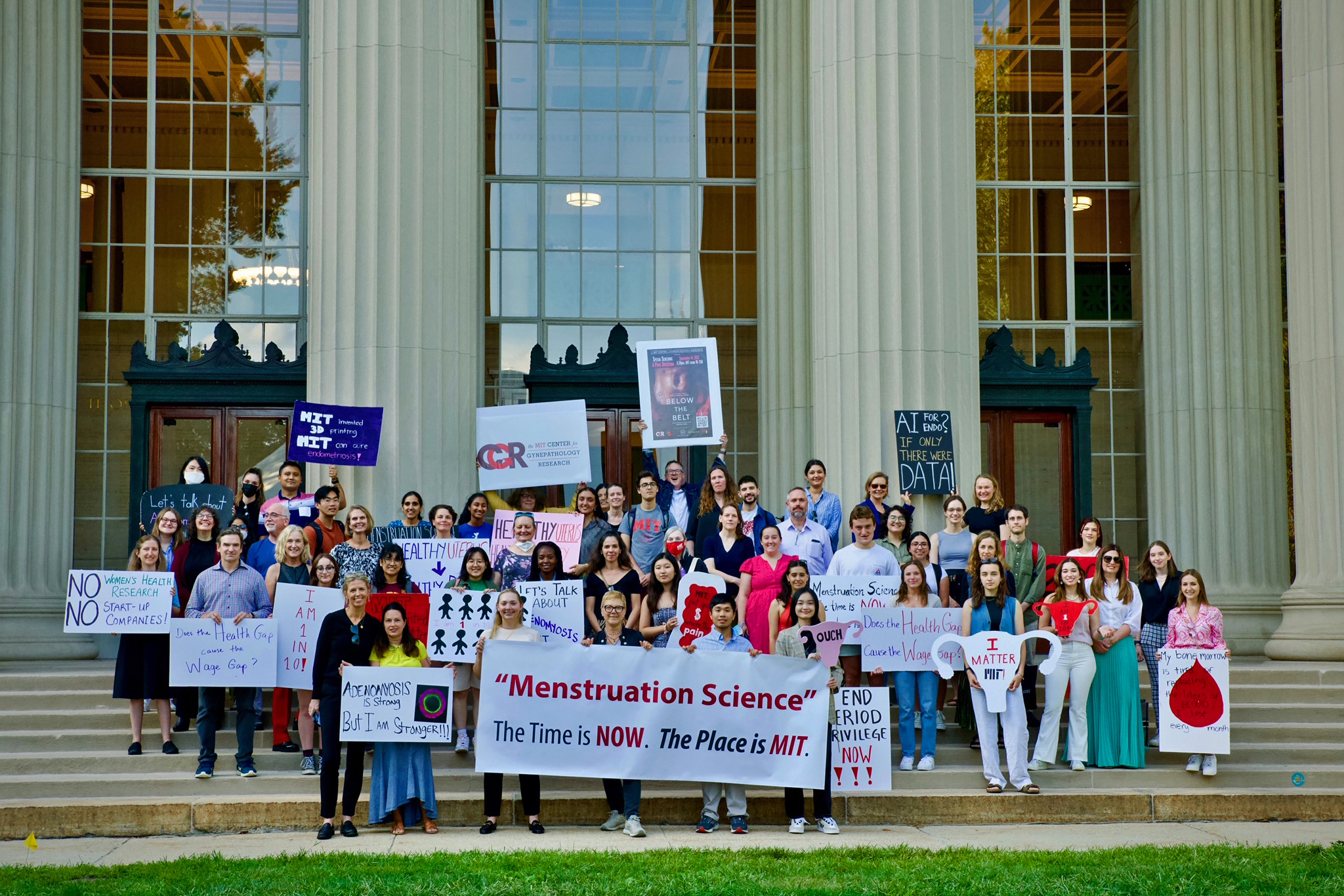 “AI for endometriosis? If only there were data!”

More than 70 MIT students, faculty, staff, and alumni gathered in MIT’s Killian Court recently to “Stand Up and Be Counted (for Women’s Health),” with a strong representation of individuals concerned about gynecology disorders such as endometriosis and adenomyosis. An estimated 20-25 percent of MIT women — about 2,000-2,500 total — are affected by one or more menstrual disorders in ways that impair their abilities to work and participate in the academic community.

The rally kicked off a series of events that attracted more than 300 people to MIT to discuss the need for more focus and funding for “Menstruation Science,” an emerging new field that is bringing diverse expertise into gynecological research. It also aims to help destigmatize the study of menstruation, through the precise language of science.

Sept. 14 events also included a networking reception, an advance screening of a new documentary, Below the Belt, and an expert panel discussion on women’s reproductive health.

Affecting approximately one in 10 women globally, endometriosis, and its sister disease adenomyosis, can cause debilitating pain for sufferers. However, both culturally and medically, it’s not a widely recognized condition. Through the launch of Below the Belt, director and producer Shannon Cohn intends to help change that. The film follows four patients urgently searching for answers to mysterious symptoms and exposes widespread problems in our healthcare systems.

“The film was excellent, and relatable – my friends and I got teary-eyed watching it,” said attendee Victoria González-Canalle, an endometriosis patient and biomedical engineering student at Boston University. “The topic and purpose of the film is important, particularly for people who do not know about endometriosis, and how so many diverse women suffer from it every day,” she added.

After previewing the film, set to debut nationwide in spring 2023, the audience of about 300 heard an expert panel discuss the “real landscape” – clinically and socially – for women’s reproductive health today. Three Boston-area surgeons shared stories of the challenges they have faced treating patients with gynecology disorders and offered perspectives on “where can we go?” Panel moderator Linda Griffith, MIT professor of biological and mechanical engineering, asked the question: “What can MIT do – as an institution – to bring more science into the diagnosis and treatment of these debilitating diseases?”

Panelist Keith Isaacson, medical director of the Newton Wellesley Hospital Center for Minimally Invasive Gynecology Surgery, thanked Below the Belt director Cohn to audience applause, saying “Congratulations – I think it’s a tremendous benefit for whoever gets to watch this film to be made aware of a disease that is so prevalent.”

Isaacson, who performs excision surgery, then explained that for endometriosis patients seeking treatment, “I take what I call the Neanderthal approach, which is to either remove or destroy the tissue. However, this is a temporary benefit, not a cure. The answer is trying to understand how the endometriosis got there, why it got there, how it behaves, and what we can do to not only prevent it but treat it better.”

“I give kudos to MIT and the Center for Gynepathology Research (CGR) for all the work you’ve done to raise the awareness,” Isaacson continued. In addition to his surgical practice, he is associate professor of obstetrics, gynecology and reproductive biology at Harvard Medical School and clinical director for CGR.

Panelist Peter Movilla added that “surgeons are shocked at how complex endometriosis can be. I didn’t even know about it until I was a resident in OB/GYN.”

“Critical discoveries for patients with endometriosis require embracing the huge differences in disease appearance and symptoms,” explained panelist Stacey Missmer, professor of obstetrics, gynecology, and reproductive biology at Michigan State University and incoming president of the World Endometriosis Society. “It is these differences – these sub-phenotypes – that will help us to improve diagnosis and develop personalized treatments. What we know for sure is that no treatment has worked for all patients. That diversity is frustrating and difficult, but it’s a huge opportunity for clinically translational science and targeted patient care,” Missmer continued.

Panelist Chris Bobel, professor of women’s, gender, and sexuality studies at the University of Massachusetts Boston and an expert in the field of critical menstruation studies, explained that “we have to encourage providers to be more curious.” She said, “I’ve found that menstrual stigma [in patients] can be a foil to curiosity. This forecloses conversation, information seeking, and support around our periods and an entire menstrual cycle, which affects multiple body systems.”

“Curiosity about menstruation and the function of the uterus can lead us to amazing places,” added Professor Griffith, who is also director of MIT’s Center for Gynepathology Research. “The uterus does this amazing scarless healing every month, and it’s remarkable. Through the immunology of the uterus, we can learn so much about immunology in general. There are many lessons we could learn – scientifically – that would benefit other disease research areas – if we were more focused on unraveling the mysteries of the uterus,” Griffith said.

Bobel observed that “the [Below the Belt] film centralizes this message: Trust women. Believe women. Listen to women.”

The Sept. 14 event was presented by MIT’s Center for Gynepathology Research (CGR) and the Below the Belt production team, with partnership from MIT’s Women and Gender Studies team.

Participants at MIT’s Stand Up and Be Counted rally displayed signs and banners with messages including:

“Menstruation Science: The Time is Now. The Place is MIT.”

“AI for endometriosis? If only there were data!”

“Does the Health Gap cause the Wage Gap?

“Let’s talk about adenomyosis at MIT.”

“No Women’s Health Research – No Start Up Companies!”

Chris BobelProfessor of Women’s, Gender & Sexuality Studies at the University of Massachusetts Boston

‘FemTech’ and a moonshot for menstruation science
October 30, 2022

Watch this TEDx talk: Rethinking how we treat endometriosis
August 31, 2022